Different animals have different modes of respiration. For example:

(i) In simple unicellular animals like Amoeba, respiration takes place by the simple diffusion of gases through the cell membrane.

Most of the animals have, however, specific organs for respiration.

(ii) The animals like earthworms which live in the soil use their skin to absorb oxygen from air and remove carbon dioxide. So, the respiratory organ in the earthworm is the skin.

(iii) The aquatic animals like fish, prawns and mussels have gills as the respiratory organs which extract oxygen dissolved in water and take away carbon dioxide from the body.

(iv) In the insects like grasshopper, cockroach, housefly and a mosquito, the tiny holes called spiracles on their body and the air tubes called tracheae are the respiratory organs.

(v) The respiratory organs of the land animals such as man (humans), birds, lizard, dog, and frog, etc.,are the lungs. (Frogs, however, breathe both by lungs and skin).

Once the air (containing oxygen) enters the skin or lungs, blood absorbs the oxygen and transports it to various tissues of the animal. Blood also picks up the carbon dioxide from the tissues and brings it back to the skin or lungs for throwing it out into the air. Please note that all the respiratory organs (whether skin, gills, trachea or lungs) have three common features :

1. All the respiratory organs have a large surface area to get enough oxygen.

2. All the respiratory organs have thin walls for easy diffusion and exchange of respiratory gases.

3. All the respiratory organs like skin, gills and lungs have a rich blood supply for transporting respiratory gases (only in the tracheal system of respiration, air reaches the cells directly).

Amoeba is a single-celled animal. Amoeba depends on simple diffusion of gases for breathing. The diffusion of gases takes place through the thin cell membrane of Amoeba. In other words, the exchange of gases in Amoeba takes place through its cell membrane. Let us discuss this in somewhat detail. Amoeba lives in water. This water has oxygen gas dissolved in it. The oxygen from water diffuses into the body of Amoeba through its cell membrane. Since the Amoeba is very small in size, so the oxygen spreads quickly into the whole body of Amoeba. This oxygen is used for respiration (energy release) inside the Amoeba cell. The process of respiration produces carbon dioxide gas continuously. This carbon dioxide gas diffuses out through the membrane of Amoeba into the surrounding water. Thus, the breathing surface (or respiratory surface) of Amoeba is its cell surface membrane. In addition to Amoeba, other simple animals like Paramecium and Planaria also depend on the simple diffusion of gases for breathing and respiration. Thus, Amoeba, Paramecium and Planaria all breathe through their cell membranes. 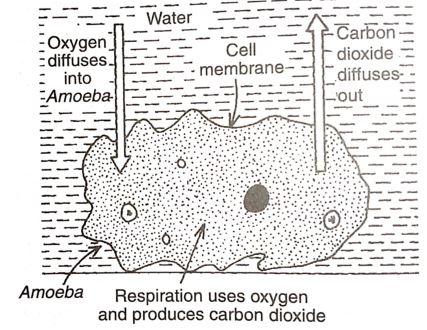 Diagram to show the process of breathing (gaseous exchange) in Amoeba.

In the small, single-celled animals such as Amoeba, the volume of their body is so small that oxygen can be introduced quickly into the whole body by the process of diffusion. This is because due to the smallness of Amoeba cell, the oxygen does not have to go far. But this is not so in larger animals like earthworms, grasshopper, fish and man (humans), etc. In large animals, the volume of body is so big that oxygen cannot diffuse into all the cells of the body quickly. This is because in these cases the oxygen has to travel a very large distance to reach each and every cell of the body. So, in large animals, there is a blood circulatory system to carry oxygen to all the parts of the body quickly (and remove carbon dioxide). The blood contains respiratory pigments which take up oxygen from air and carry it to the body cells. This will become more clear from the following example.

Diffusion is insufficient to meet the oxygen requirements of large multicellular organisms like humans because the volume of human body is so big that oxygen cannot diffuse into all the cells of the human body quickly. This is because oxygen will have to travel large distances inside the human body to reach each and every cell of the body. Diffusion being a very slow process will take a lot of time to make oxygen available to all the body cells. For example, it has been estimated that if diffusion were to provide oxygen in our body, then it would take about 3 years for a molecule of oxygen from our lungs to reach our toes by the process of diffusion. On the other hand, the blood circulatory system in humans carries oxygen to all the parts of the body quickly and removes carbon dioxide). 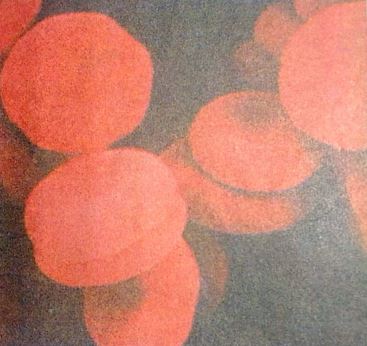 These are red blood cells (RBCs). They contain a red pigment called haemoglobin.  Haemoglobin is a respiratory pigment in blood which carries oxygen from the lungs to all the body cells very effectively.

Actually, human blood contains a respiratory pigment called haemoglobin which carries the oxygen from the lungs to all the body cells very efficiently. Haemoglobin is present in red blood corpuscles. We will now discuss the process of breathing and respiration in some large animals like  earthworm, fish and humans.

The fish has special organs of breathing called ‘gills’. The fish has gills on both the sides of its head. The gills are covered by gill covers so they are not visible from outside. The fish lives in water and this water contains dissolved oxygen in it. For breathing, the fish uses the oxygen which is dissolved in water. This happens as follows.

The extracted oxygen is absorbed by the blood and carried to all the parts of the fish. The carbon dioxide produced by respiration is brought back by the blood into the gills for expelling into the surrounding water. The fish has no lungs like us, the gaseous exchange in fish takes place in the gills. So, the respiratory surface of a fish is the surface of its gills. It is a common observation that when a fish is taken out from water it dies soon (even though there is a lot of oxygen in the air around it). This is because a fish does not have lungs to utilise the oxygen of air for breathing and respiration. The fish has gills which can extract only dissolved oxygen from water and provide it to fish. Gills can in the oxygen from air on land. Since fish does not get oxygen for breathing when taken out of water, dies. In addition to fish, many other aquatic animals like prawns and mussels also have special organs called ‘gills’ for breathing and respiration.

Like other land animals, human beings are air breathers. Air contains oxygen. The human beings need oxygen to stay alive. We get this oxygen by breathing in air. The oxygen helps to break down the food absorbed in the body to release energy. This energy is used for maintaining our life. The process by which energy is released from food in our body is called respiration. Carbon dioxide and water are the two byproducts of respiration. The process of respiration takes place inside the cells of our body. It involves our respiratory system. The function of respiratory system is to breathe in oxygen for respiration (producing energy from food), and to breathe out carbon dioxide produced by respiration. The breathing organs of human beings are lungs. It is in the lungs that the gases are exchanged between the blood and air. The gases exchanged between blood and air are oxygen and carbon dioxide. We will now describe the human respiratory system in detail.

Before we go further and describe the human respiratory system in detail, it is necessary to learn the process of breathing which is an important part of respiration. This is discussed below.

We can live without food and water for many days but we cannot live for more than a few minutes without air. This is because air is necessary for breathing. During breathing, we take air into our lungs through the nose, and then expel it. The ordinary air which we take into the lungs is rich in oxygen but the air expelled from the lungs is rich in carbon dioxide. We can now define breathing as follows: Breathing is the process by which air rich in oxygen is taken inside the body of an organism and air rich in carbon dioxide is expelled from the body (with the help of breathing organs). The breathing in human beings takes place through the organs called lungs.

The taking in of air rich in oxygen into the body during breathing is called ‘inhalation‘ and giving out (or expelling) the air rich in carbon dioxide is called ‘exhalation‘. Both, inhalation and exhalation take place regularly during breathing. A breath means ‘one inhalation plus one exhalation‘. We know that air contains oxygen. So, when we breathe in air, it is actually the oxygen gas present in air which is utilised by our body (to break down food and produce energy). Thus, we ‘breathe in‘ air to supply oxygen to the cells of our body (for the breakdown of food to release energy), and we ‘breathe out’ to remove waste product carbon dioxide from our body (which is produced during the breakdown of food in the cells). Breathing is a continuous process which goes on all the time throughout our life.

We will now learn the mechanism of breathing. That is, we will now learn how air from outside is sucked into our lungs during inhaling (breathing in), and how air from our lungs is pushed out during exhaling (breathing out). The process of breathing takes place in our lungs. Lungs are connected to our nostrils (holes in the nose) through nasal passage (or nasal cavity) and windpipe. When we inhale air, it enters our nostrils, passes through nasal passage and windpipe, and reaches our lungs. Our two lungs hang in an airtight space in our body called ‘chest cavity’. Around the sides of the chest cavity is the rib cage with sheets of muscles between the ribs. The rib cage encloses the lungs in it. At the bottom of the chest cavity is a curved sheet of muscle called diaphragm. Diaphragm forms the floor of chest cavity. Breathing involves the movements of the rib cage and the diaphragm. This happens as follows:

When we breathe in (or inhale), then two things happen at the same time :

(i) the muscles between the ribs contract causing the rib cage to move upward and outward, and

The mechanism of breathing.

When we breathe out (or exhale), even then two things happen at the same time :

(i) the muscles between the ribs relax causing the rib cage to move downward and inward, and