Something which is’ living’ (not dead) is said to be ‘alive’. In most simple terms, alive’ means ‘having life’. Alive is called ‘jeevit’ or ‘zinda’ in Hindi. We are alive and you are also alive. Those things which are alive are called living things’. All the plants and animals (including human beings) are alive or living things. Now, an important question arises : What criteria do we use to decide whether something is alive? This is discussed below.

The most important criterion to decide whether something is alive (or not) is the movement. Movement is one of the most important signs of life in an organism. All the living things (which are alive) move by themselves without any external help. In some cases the movements of living things are quite fast which can be easily observed by us but in other cases the movements are very slow and hence observed with difficulty. For example, the movements in most of the animals are fast and can be observed easily but The movements in plants are usually slow and observed with difficulty. Animals and plants move in different ways. This will become clear from the following discussion.

Living things move. Movement is the most important sign of being alive.
These pictures show the movement in animals (including human beings).

Animals can move from one place to another or they can move their body parts. For example, a frog moves when it jumps into a pond, a bird moves when it flies in the sky, an athlete moves when he runs and a fish moves when it swims in water (see Figure 1). We move our hands when we clap and our chest moves up and down when we breathe. And a dog can’t wag its tail. All these movements show that a frog bird, fish, dog and human beings are alive (or living things).

The plants are fixed in the soil at a place, so they cannot move like animals from place to place. The plants can only move parts of their body such as leaves, flowers, shoots and roots. The plant parts move towards a stimulus such as sunlight, gravity or water, etc. For example, the shoot, the leaves and flower of a sunflower plant move by bending towards the sun so as to face the sunlight. The leaves of a Mimosa pudica plant (sensitive plant) move by folding up when touched with a finger. Plants also show movement by growing their roots and shoots bigger. 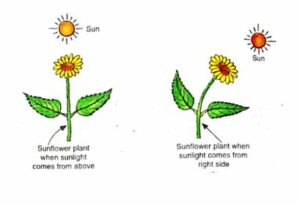 All the living things (plants and animals) are made up of tiny living units called cells. The cells themselves are made up of still smaller particles called molecules. The movements over very small scale (as those in the molecules of living things) are invisible to the naked eye. The invisible molecular movement is, however, necessary for the existence of life. In fact, viruses do not show any molecular movement in them (until they infect some cell) and this has created controversy about whether they are truly alive or not. In addition to movement, the living things also show some other characteristics. These are discussed below.

(4) Living things can respond to changes around them. They are sensitive.

(5) Living things excrete (get rid of waste materials from their body).

(6) Living things can reproduce. They can have young ones.

What are Life Processes

All the organisms perform some basic functions to keep themselves alive. The basic functions performed by living organisms to maintain their life on this earth are called life processes. The basic life processes common to all the living organisms are: Nutrition and Respiration; Transport and Excretion; Control and Coordination (Response to stimuli); Growth; Movement and Reproduction. The process of nutrition involves the taking of food inside the body and converting it into smaller molecules which can be absorbed by the body. Respiration is the process which releases energy from the food absorbed by the body. Transport is the process in which a substance absorbed or made in one part of the body is moved to other parts of the body. Excretion is the process in which the waste materials produced in the cells of the body are removed from the body.

Control and coordination (or response to stimuli) is a process which helps the living organisms to survive in the changing environment around them. The process of growth involves the change from a small organism to a big organism (or an adult organism). In movement, the organism either moves from one place to another or moves its body parts while remaining at the same place. The process of reproduction involves the making of more organisms from the existing ones, so that organisms could live on this earth for ever.

Energy is Needed for the Life Processes

The energy required by an organism comes from the food that the organism eats. Thus, food is the basic requirement of all the living organisms for obtaining energy. In this chapter we will first study the process of intake and utilisation of the food by an organism (called nutrition) and the liberation of energy from the food (called respiration). After that we will study the process of moving the digested food and other materials to the various parts of the body (called transport) and the removal of waste materials from the body (called excretion). Let us start with nutrition.