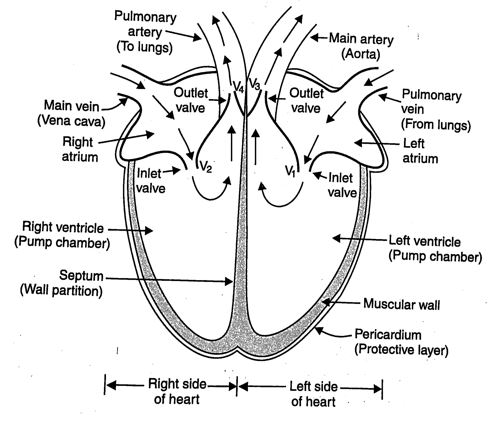 Diagram to show the inside structure of human heart.

The heart is roughly triangular in shape. It is made of special muscle called cardiac muscle. The size of our heart is about the same as our ‘clenched fisť. The heart has four compartments called ‘chambers’ inside it. The upper two chambers of heart are called atria (singular atrium), and the lower two chambers of heart are called ventricles. The two atria receive blood from the two main veins. And the two ventricles transport blood to the entire body and the lungs. The left atrium is connected to the left ventricle through a valve V1. Similarly, the right atrium is connected to the right ventricle through another valve V2. These valves prevent the backflow of blood into atria when the ventricles contract to pump blood out of the heart to the rest of the body. This is because when the ventricles contract, the valves V1 and V2 close automatically so that the blood may not go back into atria. The job of heart is to pump blood around our body. All the atria and ventricles of the heart contract and relax (expand) at appropriate times and make the heart behave like a pump. Since ventricles have to pump blood into various organs with high pressure, they have thicker walls than atria. A sheath of tissue called ‘pericardium’ protects the muscular heart. The chambers of the heart are separated by a partition called septum.

The arteries, veins and capillaries are a kind of thin pipes (or tubes) through which blood the body. Arteries, veins and capillaries are called blood vessels. Arteries are the thick walled blood vessels which carry blood from the heart to all the parts of the body. Arteries have thick walls blood emerges from the heart under high pressure. Arteries are found in the whole of our body. The main artery (called aorta) is connected to the left ventricle of the heart through a valve V3. The main artery carries oxygenated blood from the left ventricle to all the parts of the body (except the lungs). Another artery called pulmonary artery is connected to the right ventricle of the heart through another valve V4. The pulmonary artery carries deoxygenated blood from the right ventricle to the lungs. 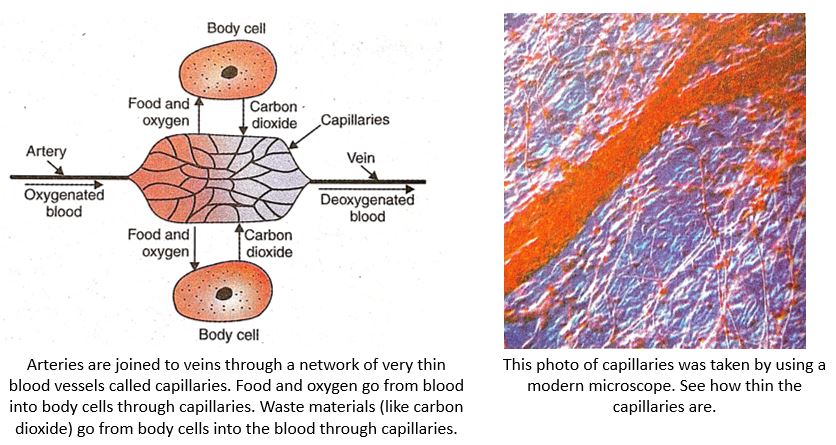 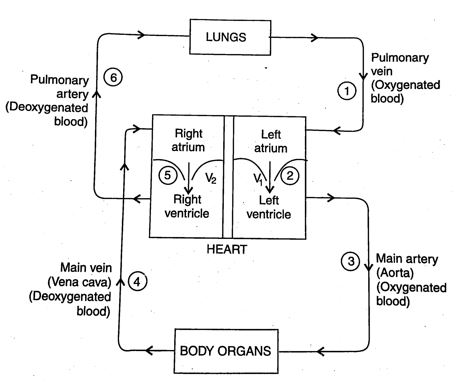 1. When the muscles of all the four chambers of the heart are relaxed, the pulmonary vein brings the oxygenated blood (oxygen-carrying blood) from the lungs into the left atrium of the heart.

2. When the left atrium contracts, the oxygenated blood is pushed into the left ventricle through the valve V1.

4. The main artery carries blood to all the organs (or parts of the body like head, chest, arms, stomach, intestines, liver, kidney, trunk and legs (except the lungs). When the oxygenated blood passes through the capillaries of the body organs, then it gives oxygen to the body cells. Since the blood loses oxygen here, we say that the blood has been deoxygenated. The blood also gives the digested food and other dissolved materials to the body cells. At the same time, carbon dioxide produced as a waste material during respiration enters into the blood. The deoxygenated blood (carrying carbon dioxide) from the body organs enters into the main vein called vena cava. The main vein carries the deoxygenated blood to the right atrium of the heart.

5. When the right atrium contracts, deoxygenated blood is pushed into the right ventricle valve V2.

This whole process is repeated continuously. In this way, the blood keeps on circulating in our body without stopping due to which all the body parts keep on getting oxygen, digested food and other materials all the time. The blood circulation also keeps on removing waste products formed in the cells of the body.

The animals such as mammals (including human beings), and birds have four-chambered heart (which consists of two atria and two ventricles). In a four-chambered heart, the left side and right side of the heart are completely separated to prevent the oxygenated blood from mixing with deoxygenated blood. Such a separation allows a highly efficient supply of oxygen to the body cells which is necessary for producing a lot of energy. This energy is useful in warm-blooded animals (like mammals and birds) which have high energy needs because they constantly require energy to maintain their body temperature. All the animals having four-chambered hearts have double circulation in which the blood passes through the heart ‘twice’ in one complete cycle of the body.

The fish has a two-chambered heart (which consists of one atrium and one ventricle). The fish does not have lungs, it has gills to oxygenate blood. In a fish, the heart pumps deoxygenated blood to the gills. Oxygenation of blood takes place in the gills. The oxygenated blood from the gills is supplied to the body parts of the fish where oxygen is utilised and carbon dioxide enters into it making it deoxygenated. This deoxygenated blood returns to the heart to be pumped into gills again. The flow of blood in a fish is called single circulation because the blood passes through the heart of fish only once in one complete cycle of the body.

The heart pumps blood into our arteries by contracting. When the heart contracts, it becomes smaller in size and pushes the blood into main artery with a great force. Then the heart relaxes (comes back to its original size) and gets filled up with blood from pulmonary vein. In this way, the heart keeps on contracting and relaxing again and again to pump blood into the body continuously. One complete contraction and relaxation of the heart is called a heart beat. The heart usually beats about 70 to 72 times in a minute when we are resting. This means that the heart pumps out blood to the arteries about 70 to 72 times per minute.

Though the average number of heart beats of a person at rest is about 70 to 72 per minute but the number of heart beats increases too much after a physical exercise or when a person is excited. For example, if we count our heart beats after running for a while, we will find it to be more than 100 per minute. The heart beats faster during and after an exercise because the body needs more energy under these conditions. The faster beating of heart pumps blood more rapidly to the body organs which supplies more oxygen to the body cells for rapid respiration to produce more energy. The heart beats can be counted easily by counting the pulse.

Most of our arteries lie deep inside our body and hence cannot be used to feel the pulse. But at some places in our body like the wrist, temple and neck, the arteries are close to the surface of skin and pass over bones. So, we can feel the pulse at wrist, temple and neck by pressing the artery lightly with our finger tips. The pulse is traditionally taken above the wrist. We can feel our own find the pulse rate as follows: 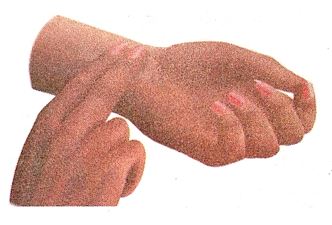 Feeling the pulse in the wrist.

The pulse can be felt with fingers placed gently on arteries at the wrist. We place the first two fingers (index finger
ace the first two fingers (index finger and middle finger of our right hand on the inner side of our left wrist and press it gently. We will feel some waves touching our fingers. These waves are the pulse. We can count the number of such waves (or thumpings) in one minute by using a watch. This will give us the pulse rate (per minute).

The pressure at which blood is pumped around the body by the heart is called blood pressure. The blood pressure of a person is always expressed in the form of two values called ‘systolic pressure’ and ‘diastolic pressure‘. In order to understand this, we should first know the meaning of ‘systole’ and ‘diastole’. The phase of the heart beat when the heart contracts and pumps the blood into arteries is called ‘systole’. And the phase of heart beat when the heart relaxes (or expands) and allows the chambers to fill with blood is called ‘diastole’.

How to Measure Blood Pressure

(i) A rubber cuff (which is a flat rubber tube) is wrapped around the person’s arm. The rubber cuff is inflated by pumping air into it to give a pressure of about 200 mm Hg to the brachial artery (which runs down the arm). This pressure can be seen on the scale of the instrument sphygmomanometer. If a stethoscope is now placed on the artery of the arm, no sound is heard through it.

Measuring of blood pressure by using a mercury sphygmomanometer. 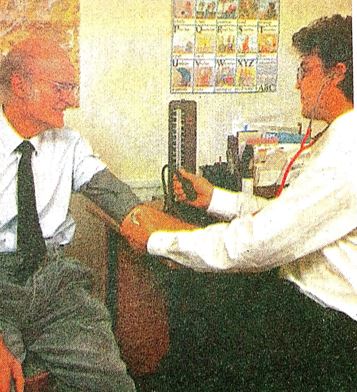 A doctor measuring the blood pressure of a patient by using a sphygmomanometer.

How do Food and Oxygen Reach Body Cells