The human respiratory system begins from the nose. Our nose has two holes in it which are called nostrils. There is a passage in the nose behind the nostrils which is called nasal passage (or nasal cavity). The air for respiration is drawn into our body through the nostrils present in the nose. This air then goes into nasal passage. The nasal passage is separated from the mouth cavity (buccal cavity or oral cavity) by a hard, bony palate so that we can breathe in air even when we are eating food (and the mouth cavity is filled with food). 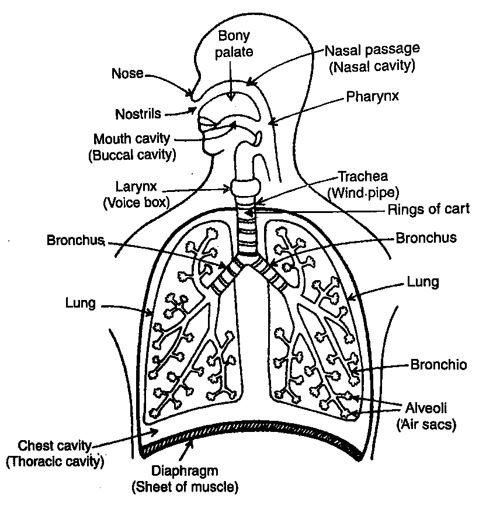 The trachea is a tube which is commonly known as wind pipe. The air coming from the nostrils during breathing passes through trachea. Trachea does not collapse even when there is no air in it because it is supported by rings of soft bones called cartilage. The upper end of trachea has a voice box called larynx. The trachea runs down the neck and divides into two smaller tubes called ‘bronchi’ at its lower end. (The singular of bronchi is bronchus). The two bronchi are connected to the two lungs. The lungs lie in the chest cavity or thoracic cavity which is separated from abdominal cavity by a muscular partition called diaphragm. The lungs are covered by two thin membranes called pleura. The lungs are enclosed in a ‘rib cage’ made of bones called ‘ribs’.

Each bronchus divides in the lungs to form a large number of still smaller tubes called ‘bronchioles’. The smallest bronchioles have tiny air-sacs at their ends. The pouch-like air-sacs at the ends of the smallest bronchioles are called ‘alveoli’ (singular alveolus). The walls of alveoli are very thin and they are surrounded by very thin blood capillaries. It is in the alveoli that oxygen is taken into the body and carbon dioxide is eliminated. In other words, it is in the alveoli that gaseous exchange takes place. The human lungs have been designed to maximise the exchange of gases as follows: There are millions of alveoli in the lungs. The presence of millions of alveoli in the lungs provides a very large area for the exchange of gases. And the availability of large surface area maximises the exchange of gases. For example, if all alveoli from the two human lungs are unfolded, they would give an area of about 80 square metres (which is nearly the size of a tennis court !). The diaphragm is a sheet of muscle below the lungs. It helps in ‘breathing in’ and ‘breathing out’. The muscles of chest also help in breathing in and breathing out.

When we breathe in air, the diaphragm and muscles attached to the ribs contract due to which our chest cavity expands. This expansion movement of the chest increases the volume inside the chest cavity. Due to increase in volume, the air pressure decreases inside the chest cavity and air from outside (being at higher pressure) rushes into the lungs through the nostrils, trachea and bronchi. In this way, during the process of ‘breathing in the air sacs or alveoli of the lungs get filled with air containing oxygen. The alveoli are surrounded by very thin blood vessels called capillaries carrying blood in them. So, the oxygen of air diffuses out from the alveoli walls into the blood. The oxygen is carried by blood to all the parts of the body (This oxygen is carried by a red pigment called haemoglobin present in blood). As the blood passes through the tissues of the body, the oxygen present in it diffuses into the cells (due to its higher concentration in the blood). This oxygen combines with the digested food (glucose) present in the cells to release energy. Carbon dioxide gas is produced as a waste product during respiration in the cells of the body tissues. This carbon dioxide diffuses into the blood (due to its higher concentration in body tissues). Blood carries the carbon dioxide back to the lungs where it diffuses into the alveoli. When we breathe out air, the diaphragm and the muscles attached to the ribs relax due to which our chest cavity contracts and becomes smaller. This contraction movement of the chest pushes out carbon dioxide from the alveoli of the lungs into the trachea, nostrils and then out of the body into air. In this way the process of gaseous exchange is completed in the human respiratory system.

Please note that during the breathing cycle, when air is taken in (or inhaled) and let out (or exhaled), the lungs always contain a certain residual volume of air so that there is sufficient time for the oxygen to be absorbed’ into the blood and ‘for the carbon dioxide to be released’ from the blood. Another point to be noted is that carbon dioxide is more soluble in water (than oxygen), so it is mostly transported in the dissolved form in our blood.

Experiment to Show That Carbon Dioxide is Produced During Respiration 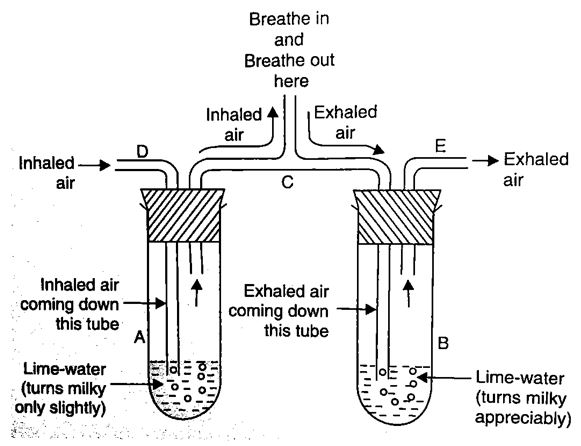 The process of breathing pumps in oxygen into our body and removes carbon dioxide). Breathing occurs involuntarily (on its own) but the rate of breathing is controlled by the respiratory system of brain. The average breathing rate in an adult man at rest is about 15 to 18 times per minute. This breathing rate increases with increased physical activity. For example, if we do some physical exercise (like sit-up exercise), then our breathing rate goes up considerably. This is because when we do some physical exercise, then our body needs more energy. And to produce more energy through respiration, our body requires more oxygen gas. Rapid breathing supplies more oxygen to body cells for producing more energy required for doing physical exercise. Thus, we breathe faster after exercise so as to produce more energy to compensate the loss of energy suffered by our body in doing exercise.

We all breathe through nose. We can, however, not breathe inside water when we are diving. This is because water does not have free air or oxygen for us to breathe (and we do not have gills like the fish to utilise oxygen dissolved in water). So, the deep sea divers carry oxygen gas cylinders with them for breathing when they go under the sea.

We have just studied that oxygen required for breathing and respiration (release of energy) is carried by haemoglobin present in our blood. The normal range of haemoglobin in the blood of a healthy adult person is from 12 to 18 grams per decilitre (12 to 18 g/dL) of blood. The deficiency of haemoglobin in the blood of a person reduces the oxygen-carrying capacity of blood resulting in breathing problems, tiredness and lack of energy. The person looks pale and loses weight.

The persons having breathing problems (or respiratory problems) are given oxygen masks to facilitate breathing. In serious cases, the patient is put on a machine called ‘ventilator’ in which a tube is inserted directly into the trachea (or wind pipe) of the patient to help him in breathing comfortably. Before we go further and describe the transport of materials in plants and animals.