Please note that during aerobic respiration (shown above), 1 molecule of glucose (food) produces 38 energy-rich ATP molecules (Please do not worry about the name ‘Kreb’s cycle written in the above equation. We will study this in higher classes). All the organisms which obtain energy by aerobic respiration, cannot live without oxygen (of air). This is because if there is no oxygen, they cannot get energy from the food which they eat. Mitochondria are the sites of aerobic respiration in the cells. Thus, the breakdown of pyruvate to give carbon dioxide, water and energy takes place in mitochondria.

We can carry out the fermentation of sugar by using the anaerobic respiration of yeast as follows: Take some sugar solution (or fruit juice) in a test-tube and add a little of yeast to it. Close the mouth of the test-tube with a cork and allow it to stand for some time. Now, open the cork and smell. A characteristic smell of ethanol (ethyl alcohol) is obtained from the test-tube. A gas is also evolved during this process. When this gas is passed through lime-water, the lime-water turns milky showing that it is carbon dioxide gas. This experiment tells us that the products of fermentation of sugar brought about by yeast are ethanol and carbon dioxide. 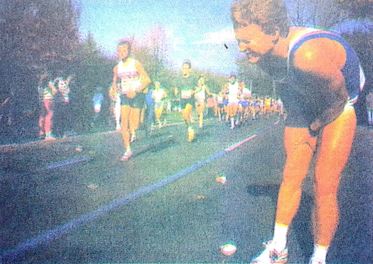 During vigorous physical exercise (such as running a long distance race) leg muscles respire anaerobically (without oxygen) to produce extra energy. The man on the right side in the above picture has just got a cramp in the leg due to the accumulation of lactic acid in the leg muscles produced by the anaerobic respiration which took place in leg muscles during marathon (a long-distance running race).

Just imagine what would happen if the fast running deer trying to escape from the clutches of cheetah gets a leg cramp at this very moment (due to accumulation of lactic acid in its leg muscles produced during anaerobic respiration). The cheetah is sure to get enough lunch or dinner!

This means that even the animals like lion, tiger, cheetah and deer, etc., can get leg cramps due to the accumulation of lactic acid in leg muscles if they run very fast for a considerable time. Please note that:

(a) the anaerobic respiration in plants (like yeast) produces ethanol and carbon dioxide as end products.

(b) the anaerobic respiration in animal muscle tissue produces lactic acid as the end product.

Differences between Aerobic and Anaerobic Respiration

Let us answer one question now.
Question: The breakdown of pyruvate to give carbon dioxide, water and energy takes place in :