Amoeba is a unicellular animal. Amoeba eats tiny (microscopic) plants and animals as food which float in water in which it lives. The mode of nutrition in Amoeba is holozoic. The process of obtaining food by Amoeba is called phagocytosis (‘Phagocytosis’ means ‘cell feeding’). The various steps involved in the nutrition of Amoeba are : ingestion, digestion, absorption, assimilation, and egestion. All the processes of nutrition are performed by the single cell of Amoeba. This is described below.

Amoeba has no mouth or a fixed place for the ingestion of food intake of food). Amoeba ingests food by using its pseudopodia. When a food particle comes near Amoeba, then Amoeba ingests this food particle by forming temporary finger-like projections called pseudopodia around it. The food is engulfed with a little surrounding water to form a food vacuole inside the Amoeba. This food vacuole can be considered to be a ‘temporary stomach’ of Amoeba.

Different stages in the nutrition (feeding) of Amoeba.

In Amoeba, food is digested in the food vacuole by digestive enzymes. The enzymes from surrounding cytoplasm enter into the food vacuole and break down the food into small and soluble molecules by chemical reactions. Thus, digestion in Amoeba takes place inside the food vacuole due to which the food dissolves (or food becomes soluble).

A part of the food absorbed in Amoeba cell is used to obtain energy through respiration. The remaining part of absorbed food is used to make the parts of Amoeba cell which lead to the growth of Amoeba. Thus, on assimilating food Amoeba grows in size. And then Amoeba can reproduce by dividing into two daughter cells. 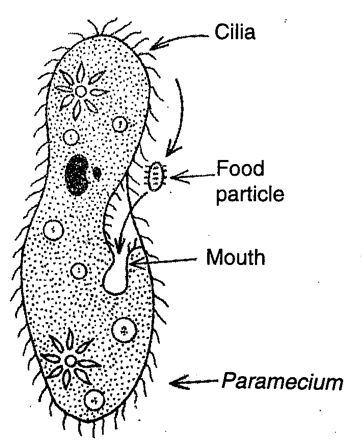 Paramecium puts the food particle into its mouth with the help of cilia.

Paramecium is also a tiny unicellular animal which lives in water. Paramecium uses its hair like structures called cilia to sweep the food particles from water and put them into its mouth. The Paramecium has thin, hair-like cilia all over its body. The cilia move back and forth rapidly in water. When the cilia present around the mouth region of Paramecium move back and forth, they sweep the food particles present in water into the mouth of Paramecium. This is the first step in the nutrition of Paramecium which is called ingestion. Ingestion is followed by other steps such as digestion, absorption, assimilation and egestion (as explained in the case of Amoeba).

In the complex multicellular animals like man (humans), grasshopper, fish and frog, etc., all the processes involved in nutrition are performed by a combination of digestive organs. This combination of digestive organs is called digestive system. We will now describe all the processes in the nutrition of complex multicellular animals by taking the example of nutrition in human beings. Please note that a long tube running from mouth to anus of a human being (or other animals) in which digestion and absorption of food takes place is called alimentary canal. Alimentary canal is also called ‘gut’.