We have just studied the nutrition in plants. We have learnt that plants are autotrophic organisms which can manufacture their own food. So, plants don’t have to look to others for getting their food. They are food producers themselves. But this is not so in the case of animals. Animals are heterotrophs and hence they depend on other organisms for their food. Thus, animals need an external source of food. We will now discuss how animals obtain their food.

Animals Obtain their Food from Plants or Other Animals

Since animals cannot make their own food, they depend on readymade food. This readymade food comes either from ‘plants’ or from ‘other animals’. Thus, animals obtain their food from plants or other animals (which they eat). We (human beings) are also animals. We obtain the foods like wheat, rice, pulses (dal), fruits and vegetables from plants. And the foods like milk, curd, cheese and eggs are obtained from animals. Some people also eat meat, chicken and fish as food. These foods are also obtained from animals.

Even some of the plants can eat insects. Venus fly-trap plant is one such plant.

Yeast plant is one such example. Even the plants can eat insects. For example, the pitcher plant and the venus fly-trap are the two plants which eat insects.

All the animals can be divided into three groups on the basis of their food habits (or eating habits). These are :

We will now discuss herbivores, carnivores and omnivores in somewhat detail. Let us start with the herbivores.

Some animals eat both, plants as well as other animals as food. Those animals which eat both, plants and animals, are called omnivores. In other words, the omnivores eat plant food as well as the meat (or flesh) of other animals. Some of the examples of omnivores are: Man (Human beings), Dog, Crow, Sparrow, Bear, Mynah, and Ant. Man is called an omnivore because he eats the plant food (such as grains, pulses, fruits and vegetables) as well as the meat of animals (such as goat, chicken and fish). Thus, omnivores are plant eaters as well as meat eaters. Omnivores are also called omnivorous animals.

All the living things on earth actually depend on the sun for their food. This has been shown clearly in given below: 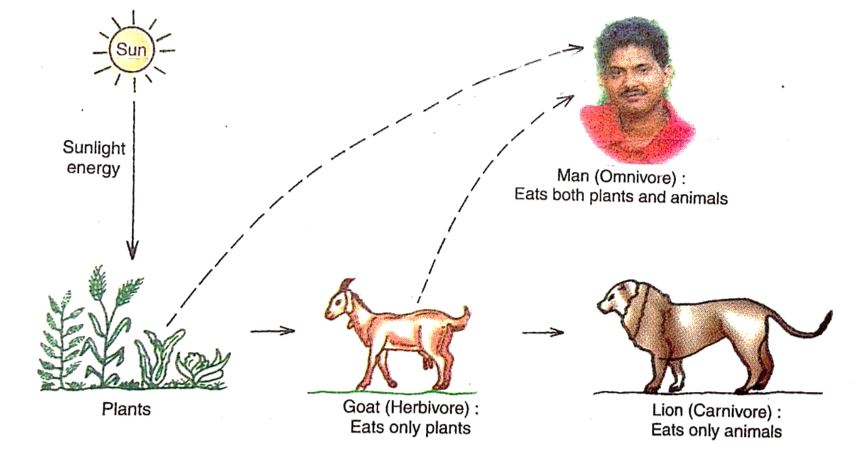 Diagram to show how all living things (plants and animals) depend on sun for their food.

Plants use the energy of sun and prepare food by photosynthesis. The plants utilise this food for maintaining their life. These plants and their products) are also eaten up by herbivores and omnivores as food. And the carnivores eat herbivores as food. In this way, it is the energy of the sun which provides food for plants, and animals (herbivores, carnivores and omnivores). In the goat is a herbivore which eats plants; man is an omnivore who eats both, plants and meat of goat; and lion is a carnivore which eats the flesh of goat (The man usually does not get eaten up by lion because he is a very clever fellow !).

An organism either makes its own food from raw materials as green plants do or takes in readymade food as animals do. The process of obtaining food and then using it for obtaining energy, growth and repair of the body, is called nutrition. We will now discuss the animal nutrition in detail.

Different Steps in the Process of Nutrition in Animals

There are five main processes concerned with the use of food by animals. In other words, there are five steps in the process of nutrition in animals. These are: Ingestion, Digestion, Absorption, Assimilation and Egestion. All these steps are discussed below:

In order to provide the energy necessary for growth and carry on life’s activities, we must ‘eat food’ or ‘take food into the body’. The process of taking food into the body is called ingestion. In most simple terms, ingestion means ‘eating of food’ by the animal. When we put food into our mouth with hands, we are ingesting (the food). 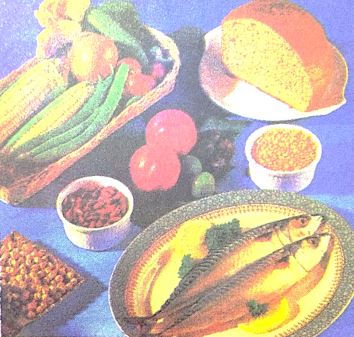 Our food contains very big molecules of carbohydrates (like starch), fats and proteins which cannot be absorbed in the body as such. They must be broken down into small, water soluble molecules which can be absorbed by the body. This happens in the process of digestion.